In this issue, we are going to say goodbye to two historic neighborhood food delights, one on the Southside, one on the Northside.  Here, we are just going to give a little history and say a gentle goodbye – we’ll miss you both!

The Elmwood Cafe, 2900 College Avenue, has been a neighborhood gathering place for close to 100 years on the corner of College and Russell in what’s known as the Elmwood Shopping District.  It first opened in 1921 as the Elmwood Pharmacy, a small local pharmacy with a soda fountain and therein lies its love-affair with the surrounding neighborhood and its reputation as a major player in Berkeley’s political history. 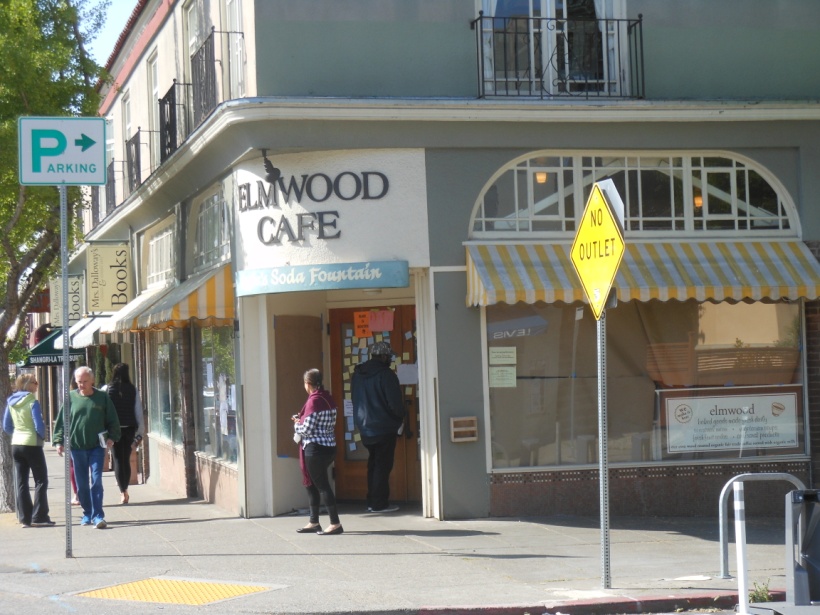 In 1950, Charles Osborne, a World War II ace fighter pilot, purchased the business, renamed it “Ozzie’s” and focused the business around the soda fountain.  Shortly thereafter, it because a meeting place for the people who waged the successful fight against the extension of the 580 freeway down Ashby Avenue from the Claremont Tunnel to South Berkeley.  Folks like Barbara Lubin who went on to found the Middle East Children’s Alliance and Marty Schiffenbauer, sometimes called the Father of Berkeley Rent Control and government by citizen initiative, became regulars.

In 1982, in Ozzie’s Fountain, Berkeley’s then-Mayor Gus Newport and others launched what was said to be the first commercial rent controls in the Nation.  The initiative was approved by Berkeley voters in June 1982 and  provided for the Board of Adjustments (now called the Zoning Adjustments Board) to annually determine a formula that provided for a “fair rate of return.” The Council extended the ordinance to Telegraph Ave. and West Berkeley, but by 1986, amid complaints that commercial rents everywhere were “exploding” because property owners were trying to get ahead of pending controls, the State Legislature stepped in and approved bills prohibiting local commercial rent control.

In January 2015, a waitress saw W. Kamau Bell, an African-American man, standing at an outside table, holding a book in hand, talking to some white people. She thought he was trying to sell them something, so she asked him to leave. No police were involved and it turned out that one of the people at the table was his wife.  The waitress was fired, the owner apologized, and a forum on racism at Willard Middle School was organized during which he promised to eliminate racism in his business, other stores in the Elmwood, in the neighborhood and in Berkeley.

On April 12, 2018, we all learned through national media about the arrest of two black men who refused to leave a Starbucks cafe in Philadelphia.  A few days later, on April 18, 2018, Mr. Bell posted a blog on CNN about the 2015 incident in the Elmwood Cafe titled:  “I know what it’s like to get kicked out for being black.”

On Thursday afternoon, April 19, 2018, people described the Cafe as open and busy.  On April 20, 2018, the windows on the Cafe were covered over with brown paper and a notice that the Cafe was closed along with a story about the incident published by Berkeleyside, was posted on the door.  Since then, people  have been busy putting Post-Its and signs with their comments on the building.

What will happen next? We’ll have to wait and see.

In the meantime, Northside:  Virginia Bakery 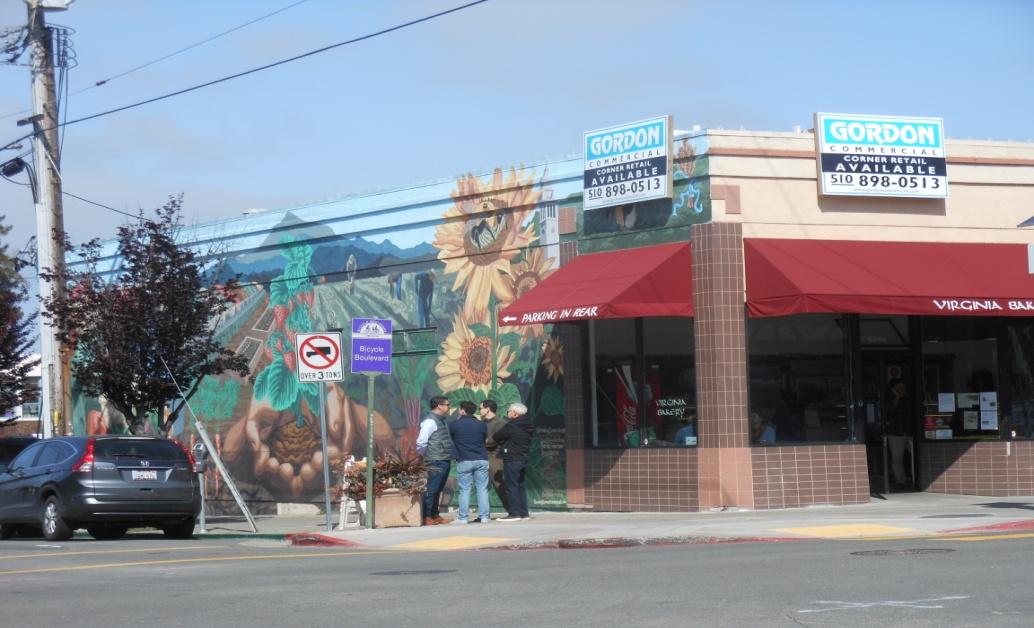 The Virginia Bakery, at 1690 Shattuck Avenue, has been the place to buy a premade cake or order a custom made one, along with such items as cookies, bear claws and dinner rolls.

The current owners, John and Anne Erdmann, have run the business for 64 years since they purchased it in 1954 from a family who had owned it since 1925.  That’s a 93 year history, but some say there has been a bakery in that same location years before 1925!  So, Virginia Bakery, is probably Berkeley’s oldest mom-and-pop food establishment.

Among their customers were Davey Lopes, an Oakland A’s second baseman who ordered a 50th birthday cake in the shape of a baseball glove.  Others ordered cakes that looked like bowling balls, college diplomas or ruby red lips or even a blood-red Halloween cake, covered with black spider webs. Huey Newton, co-founder of the Black Panthers was a prominent customer who interestingly enough ordered conventional cakes. Martin Snapp wrote in the April 13, 2018 edition of The Journal that Al Hart, a news anchor with KCBS regularly ordered cinnamon nut bread even years after he moved away from Berkeley.  We know a former Berkeley Mayor who over 30 or so years, always ordered an angel food cake with raspberry swirl icing for her son’s birthday and a well-known neighborhood activist, who arranged for the bakery to produce a special cookie that he gave to Berkeley cops when he wanted to say thank you.

In early April, the Erdmans posted on Facebook their intention to close on April 28, 2018 to spend more time with their grand children.  Long time customers are lining up at 7:30 am every morning to say goodbye and get their last taste of their favorite goodies.

We’ll miss you both of you, Virginia Bakery and The Elmwood Café

Please Note:  This Section will include almost anything that might be of interest to Berkeley Foodies — reviews of neighborhood food businesses, news about food products or services, even a recipe from time to time.  Our motto is You never know what you’ll learn in the BNC eNEWS!“

So, please send us some food news.  If your news is a restaurant review, we won’t pay for the cost of your meal, but your review will provide you with a great excuse that it really was your high civic duty to check out that place you’ve always wanted to try so you can tell all your friends and neighbors about your experience! Send your food news, along with your name and contact information to bnc50@berkeleyneighborhoodscouncil.com.  We promise that our reviewers and food news contributors will always be anonymous, unless you absolutely insist that your name be published.