The nomination for inclusion in this Section of the BNC eNews issue is neither a person nor an organization.  It’s a sacred place – one of the 425 Ohlone Indian Shellmound sites found around San Francisco Bay.

In October 2000, the three blocks bounded by University Avenue, Hearst Avenue, the I-80 freeway and Fourth Street was designated Berkeley Landmark Number 228.  In that area, Spenger’s Parking Lot, 1900 Fourth Street, is currently the subject of a hotly contested development proposal that has gained fame, not only because it’s in an Indian Shellmound area, but also it’s the first housing development in the State requesting an over-the-counter permit under SB-35.

Information presented in 2000 was that the West Berkeley Shellmound, located at the mouth of Strawberry Creek, was once 30 feet high and hundreds of yards long. The Ohlone people lived there for 4,500 years, from 3,700 BC to 800 AD, making it probably the biggest and earliest inhabited place in the Bay Area. The landmark applicant’s author maintained the site was older than the Pyramids in Egypt!  Not only did families live here, raise their children and thrive off of the abundant shell fish from the Bay, it was also a burial ground.  In the 50’s UC students excavated a small area and were said to have found some 95 human remains.  Artifacts from the area are also said to be stored on the Berkeley campus.

In March of 2015, the Rhoades Planning Group on behalf of West Berkeley Investors, LLC, Danville, CA, filed an application to build two separate buildings, one 3 stories tall, the other 5 stories.  The buildings were to be commercial and retail on the ground floor with 135 dwelling units above, 11 of which were to be “affordable.”  Over 300 parking spaces were included to serve both residents and existing development on Fourth St. and more than 200 spaces for bikes.

This graphic depicts the northwest corner of the proposed project at University Ave. and Fourth St.  The elevated University Overpass is on the left.

The application, filed by former Berkeley Planning Staff member Mark Rhoades, touted that the proposed project provided needed housing but was not seeking all of the density bonus to which it was entitled, provided needed parking for the highly successful Fourth Street shopping district along with lots of bike spaces, sheltered residents from the noise of the neighboring railroad tracks by putting the parking between the tracks and residences, and included a public paseo. (In case you’re wondering, paseo is a Spanish word that refers to a leisurely stroll, especially in the evening.)

Between January and March 2014, Dr. Allen Pastron, of Archeo-Tec, Inc., Oakland, under the observation of Andy Galvan, described as an Ohlone Indian and Cultural Resource Management Consultant, investigated the parking lot grounds, confirmed an earlier examination and wrote:

“…investigators found no historically significant remnants of the West Berkeley Shellmound within the parking lot grounds and have concluded that it is highly unlikely that such remnants exist within the property.”

By 2016, the proposed project had shifted to 155 units with 12.5 to be “affordable” and added that a community room would be available for the purpose of cultural activities, including a display space for art work and artifacts. In November, an Environmental Impact Report further stated that the applicant would pay $75,000 toward “maintaining, with appropriate dignity”  the Ohlone Indian Cemetery in the city of San Jose, plus fund information for the city of Berkeley to use identifying areas of archeological sensitivity, and build a permanent display within the boundary of the Shellmound area that would describe the archeological and cultural significance of the site.  In addition, several intersections were found to be negatively impacted by the project, but these impacts were listed as “Significant but Unavoidable.” 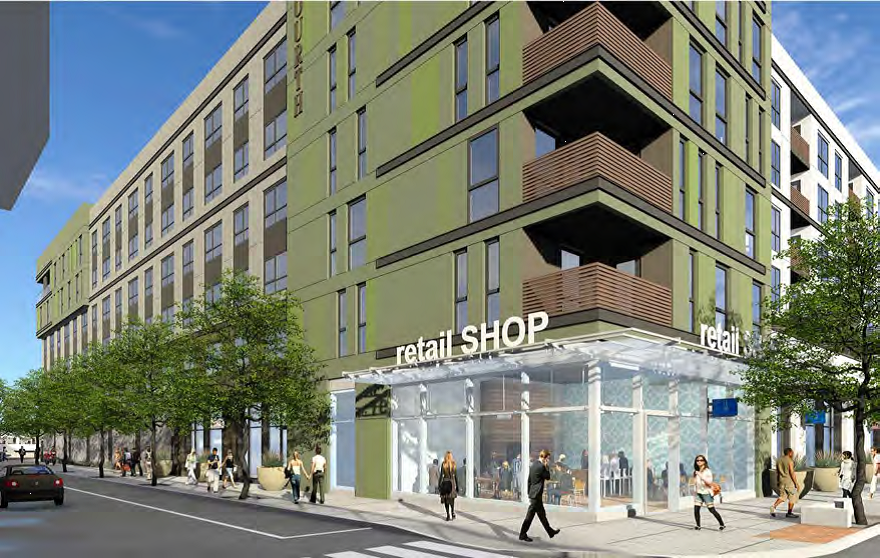 In March of 2018, a new project application was submitted – now with 260 units, with 50% of them to be for households with 80% of average medianincome (that’s $80.400/ year for a family of 4), somewhat reduced ground floor commercial space and fewer parking and bike spaces. Note: this is same view as the previous graphic with the elevated University Ave. Over-pass to the left.

And as stated previously, the applicant is now seeking approval under SB-35.  This bill, authored by Senator Scott Wiener of San Francisco allows over-the-counter issuance of permits.  It was introduced in January of 2017, and was approved by the Legislature and signed by Governor Brown in September of that same year. Both of Berkeley’s representatives, Assembly Member Tony Thurmond and Senator Nancy Skinner voted to approve the bill.

Opposition to the project has grown substantially with archeologists vigorously debating both sides.  To learn more about this and other shellmounds and how they have been systematically destroyed over the years, go to the Indian People Organizing for Change (IPOC) website which was formed around the spirited advocacy of Corrina Gould.  You can also find ways to contact Ms. Gould there, even a phone number.   Another website with a great amount of information is the website of the The California Institute of Community, Art, and Nature which is associated with Malcolm Margolin, publisher of Heyday Books.

As we understand it, this project still faces votes from various City bodies. BNC will keep you informed, so sign up at bnc50@berkeleyneighborhoodscouncil.com to receive all future e-NEWS issues and notices about this important matter. 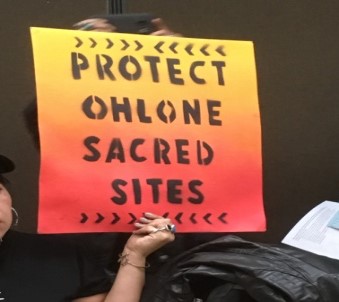