BNC selects a Berkeley cultural treasure to feature in each eNEWS issue.  Since we started, BNC has expanded this section so that we now consider community organizations, businesses, activities, architecture, events, and people that make the City of Berkeley such a special place.  However, whatever or whoever is nominated for this section must reside in, or have a strong connection with Berkeley, and be nominated by a Berkeley resident who has no connection, other than that of an ordinary patron of, or a participant in, whatever is being nominated.  Submissions may be sent to bnc50@berkeleyneighborhoodscouncil.com.  BNC will notify the selected treasure.

Two events that occurred during the month of August in years past were nominated for inclusion in this issue’s Cultural Corner.  BNC couldn’t let August go by without mentioning both and recognizing their importance in our daily lives.  We think you will agree.

It all started back in Seneca Falls, New York at a Women’s Rights Convention held in 1848.  This was the first such convention of its kind in the U.S.  It was organized by Quaker women and Elizabeth Cady Stanton (who wasn’t a Quaker) as a convention to discuss the social, civil and religious condition, and rights of women.

Other conventions followed, and a movement began to grow to grant women the right to vote — something simply unheard of back then.  However, it would take some 30 years of hard struggle until a resolution granting that right was finally introduced into Congress in 1878.  It would take another 41 years after that before the resolution was passed by the House of Representatives on May 21, 1919 and two weeks later by the Senate.

All-in-all, between Seneca Falls and June 1919, the Nation had seen 71 years of parades, silent vigils, hunger strikes, civil disobedience, arrests, personal injuries, letter-writing, lobbying at all levels of government, holding up signs, and most likely hundreds of thousands of individual household arguments.  We all need to remember this when we think of the slow pace of government today, and we most certainly need to honor the courage and tenacity of those women who didn’t step back from doing the right thing, when it was against all of the social norms of their times and the dire consequences that men, but some women too, said would certainly descend upon the Nation if women were granted the right to vote!

By 1919, the women’s right to vote movement had made substantial gains, as 15 states had legalized women’s suffrage (nine of them in the West).  The honor of being the first state to do so goes to Wyoming in 1890.  They were also progressive enough to elect the country’s first female governor, Nellie Tayloe Ross back in 1924 when she was elected to serve out the term of her husband who had suddenly died in office.  Apparently the Democratic party in Wyoming was anxious to earn for their state the official nickname, The Equality State.  She served for two years, but then was defeated by a Republican at the next election.  Well, we digressed a little, but we didn’t want to leave you wondering what happened to this good lady after that, so just for your information, she went on to become the first female head of the U.S.  Mint, appointed in 1933 by President Franklin Delano Roosevelt.

Back to the subject at hand, even with those gains in 1919, getting the vote for women still wasn’t finished.  Hundreds of women were injured when they marched in protest on the eve of Woodrow Wilson’s inauguration.  Wilson favored women’s suffrage at the state level, but didn’t support a Constitutional Amendment because the Democratic Party was sharply divided, with the South opposing on the grounds of state’s rights.  In any case, the only Southern state to give women the right to vote was Arkansas.  President Wilson is believed to start having a change of heart when a 1917 referendum in New York State favored women’s suffrage and when he recognized the role that women played in World War I.  In January 1918, Wilson went in person to the House and made a strong and widely published appeal to the House to pass the resolution.  It passed but the Senate fell two votes short, until 1919, when it finally passed handily.  Yet even then, the task still wasn’t finished because the final hurdle of obtaining agreement of three-fourths of the states needed to be accomplished before the Constitution could be amended.

That would take another year, and then the fate of the 19th Amendment would be decided by Tennessee.  By the summer of 1920, 35 of the 48 states had voted to grant women the right to vote.  The number of states needed for a Constitutional Amendment was 36.  Four states were thinking about calling a special session, and three declined to do so.  One state, Tennessee agreed, but the outcome was very tense because the Tennessee Legislature was badly split on the question.  On the morning of the big vote, Harry Burn who had said he opposed the right of women to vote, was in his first term and the youngest person to be elected to the Tennessee Legislature at that time, opened a letter from his mother.  At the end of the letter, she added the words:

be a good boy and help Mrs. Catt* put the ‘rat’ in ratification.(* a reference to suffragist icon, Carrie Chapman Catt)

The vote was 48 for granting women the right to vote and 48 against, and it came down to the vote of one man, Harry Burn.  He cast the deciding “yes” vote and the rest is history.  The next day he explained to his colleagues:

I know that a mother’s advice is always safest for her boy to follow, and my mother wanted me to vote for ratification.

The Resolution approved by the Congress was then ratified on August 26, 1920 as the 19th Amendment to the Constitution.

To which, BNC says:  Thank you Mr. Burn! 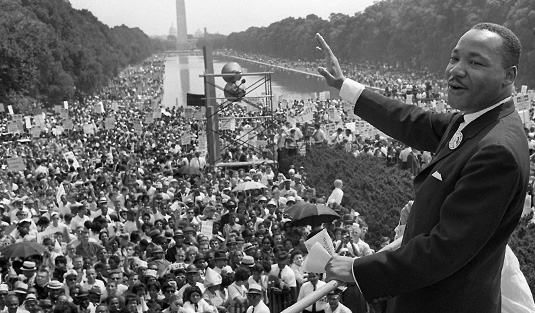 The second of the two events to remember and celebrate in the month of August is Dr. Martin Luther King, Jr’s I Have a Dream Speech.  Considering what has been happening nationwide, and including the displacement and loss of diversity occurring in Berkeley and throughout the Bay Area, BNC thought it would be good to once more hear a part of the speech that was delivered on August 28, 1963 at the Lincoln Memorial in Washington, D.C.

More than 250,000 people gathered together on that day.  There had been previous discussion among the various speakers as to which one of them would speak last.  Many apparently felt that the reporters covering this event would have disappeared toward the end of the speeches because they had to file their stories, so no one liked the prospect of being last.  It didn’t seem to bother Dr. King, because he volunteered to be the last speaker.

The story is told that he talked with his advisors about including in his speech his “Dream” but they didn’t want him to do that, so he didn’t include it in his script.  However, as his speech unfolded with the strong and beautiful cadence of Black preachers, Mahalia Jackson is said to have called out to him, “Tell them about the dream!” So, at the spur of the moment and as he was moving toward the end of his remarks he said:

And so even though we face the difficulties of today and tomorrow, I still have a dream.  It is a dream deeply rooted in the American dream.

I have a dream that one day this nation will rise up and live out the true meaning of its creed:  “We hold these truths to be self-evident, that all men are created equal.”

I have a dream that my four little children will one day live in a nation where they will not be judged by the color of their skin but by the content of their character.

I have a dream today!

I have a dream that one day, down in Alabama, with its vicious racists, with its governor having his lips dripping with the words of “interposition” and “nullification” — one day right there in Alabama little black boys and black girls will be able to join hands with little white boys and white girls as sisters and brothers.

I have a dream today!

This is our hope, and this is the faith that I go back to the South with.

My country ’tis of thee, sweet land of liberty, of thee I sing.

Land where my fathers died, land of the Pilgrim’s pride,

From every mountainside, let freedom ring!

And if America is to be a great nation, this must become true.

And so let freedom ring from the prodigious hilltops of New Hampshire.

Let freedom ring from the mighty mountains of New York.

Let freedom ring from the heightening Alleghenies of Pennsylvania.

Let freedom ring from the snow-capped Rockies of Colorado.

Let freedom ring from the curvaceous slopes of California.

But not only that:

Let freedom ring from every hill and molehill of Mississippi.

From every mountainside, let freedom ring.

And when this happens, and when we allow freedom ring, when we let it ring from every village and every hamlet, from every state and every city, we will be able to speed up that day when all of God’s children, black men and white men, Jews and Gentiles, Protestants and Catholics, will be able to join hands and sing in the words of the old Negro spiritual:

Thank God Almighty, we are free at last!

Recognized as one of the Greatest American Speeches, it is fitting that it was given on the steps of the Lincoln Memorial.  The entire speech can be found on the internet at http://www.americanrhetoric.com/speeches/mlkihaveadream.htm

It is time, to once more hear these eloquent words and dream the Reverend Martin Luther King, Jr’s Dream.