As seems to happen, good intentions go astray. Because it seemed to be a good idea to publish the BNC E-News more frequently, we had planned to have each new issue present single subjects. As it turned out, so many new issues and projects came up that required extra meetings, phone calls and e-mails, we simply couldn’t meet the goal of publishing anything, let alone more frequently. That led to some soul searching around the question of why should BNC, or anyone for that matter, keep trying to strengthen the voice of the neighborhoods? Why not just lock the front door, pop something into the microwave, log into Facebook, text a few thoughts, and catch a little late tv before nodding off until tomorrow when you once again join the morning traffic congestion parade and start all over again?

But Wait! Our City, in particular, has an enduring and proud history of expressing a diversity of opinion around any subject, at any time. And while we’re proud of the innovative ideas that have emerged, we can’t just ignore the shouting, name calling, and implied threats that have become so much a part of today’s civic discussions. While it’s understandable that people retreat to the comfort of their phones and anonymous electronic debate, we can’t just give up! 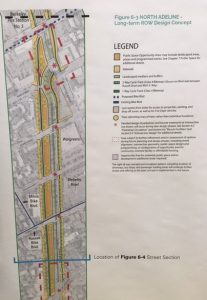 We’ve said it before that even though we don’t agree on lots of things, if we want to resolve our problems, we need to be connected in a way that allows for the expression of a variety of opinions and ideas in order to arrive at some positive consensus. Neighbors connect us as individuals. Neighborhoods connect us to wider communities and to our government. Strong neighborhoods build livable cities when neighbors know and care for each other. This isn’t a complicated concept, but it is one we must make an effort to nourish because in the long run we are the government and being fully informed with clear pathways that allow for the expression of our views is the key to our future.

That’s why BNC intends to keep on trying to achieve our goal of getting the word out more frequently. That being said, let’s get on with Issue 26 which is all about the Adeline Corridor Specific Plan (ACSP).

What is the Adeline Corridor?

What is the Purpose of a Priority Development Area (PDA)?
Specific PDAs are those areas which are supported by existing public transit where higher density commercial and housing development should occur. Their purpose is threefold: To 1). increase housing supply, including affordable housing; 2. boost transportation ridership; and, 3). promote alternatives to the use of automobiles.

How did the Adeline Corridor Specific Plan come about?
In 2014 the City Council applied for a planning grant from the Association of Bay Area Governments (ABAG) and the Metropolitan Transportation Commission (MTC) to prepare a plan for the South Shattuck and Adeline PDAs. On November 12, 2014 the City Council accepted a grant of $750,000 from ABAG/MTC. The total cost for planning was said to be $852,273 requiring the City to add $102,273 to the grant. This was unanimously approved by Mayor Tom Bates and Council Members Maio, Moore, Anderson, Arreguin, Capitelli, Wengraf, Worthington and Wozniak. The planning effort was launched with a Community Visioning effort in the beginning of 2015 and is continuing to date.

What is the Adeline Corridor Specific Plan (ACSP)?
A 380-page plan has been compiled with comments from the public regarding the resultant Draft Environmental Review (DEIR) ending on July 19, 2019. The ACSP states that while the plan’s geographic scope is limited, it will also consider the relationship to the larger South Berkeley neighborhood. The Plan is divided into five sections:
• Housing, including affordable
• Economic opportunity
• Transportation
• Public spaces
• Community character and land use

Is planning for the Adeline Corridor still occurring?
Yes, this effort is continuing. The planner involved is Alisa Shen who can be reached at ashen@cityofberkeley.info, telephone 1-510 981-7409. There is also a website for the ACSP at www.cityofberkeley.info/adelinecorridor. Subcommittees regarding Land Use, Transportation and Public Space, and Economic Opportunity and Workforce Development are listed giving the dates and places for their upcoming meetings during July and on into August. Interested people can sign up to receive agendas and updates about the planning effort.

There is much to be said for this entire effort but one must keep in mind three additional issues:
1. While the City may own the air rights over the Ashby BART Station, how much authority will BART have in determining the amount and type of development that can occur there?
2. The area has also been identified as an Opportunity Zone in which tax relief incentives will be given as an effort to encourage future development. The City, particularly Councilmember Bartlett, is actively looking at ways to achieve better development, but nothing has yet been decided. BNC is considering holding an up-coming forum on Opportunity Zones, so stay tuned on this very important issue that will affect this and other areas in the Downtown and West Berkeley as well.
3. This area was once a thriving retail-commercial area surrounded by pleasant neighborhoods made up of tree-lined streets and well-cared for homes. BART construction devastated the vitality of much of the area and various revitalization plans and proposals have been proposed with mixed results. Today, the area has experienced significant gentrification that has displaced long-time residents and businesses to the extent that the African American population in Berkeley has declined from 20% to 8%. On July 23, 2019, when the Mayor delivered his State of the City speech, both Council Member Ben Bartlett and Mayor Jesse Arreguin highlighted the Adeline Corridor Specific Plan as a key element in the revitalization of South Berkeley.

While the State of the City speech was rosy in its statement of the City’s efforts to date, nothing was mentioned about how the neighborhood-based Friends of Adeline (FOA) felt about the ACSP. This is what they said about the Plan in their opening comment:
We feel that it does not represent what our community views as appropriate to development of South Berkeley resources.

They further define what they envision for the area
• Housing, new and old, that is affordable for low-income current residents.
• Economic development that prepares youth and adults for employment and strengthens vulnerable populations.
• Sustainable infrastructure that provides health care, green spaces and recreation.
• Provide that profits largely remain in the area through strong encouragement of non-profit development and community agreements with for-profit developers.
• Nurturing the arts which are integral to the community’s culture and that happen along with anti-displacement measures that prevent them from contributing to gentrification.
• Development that strengthens and brings together the corridor rather than continues the division of the earlier BART corridor, and that enhances the economy, culture, sustainability and healthfulness of South Berkeley.

This summary does not do justice to the several page document the Friends of Adeline submitted. They have a website, Friends of Adeline, which gives more information about them and what other activities they are engaged in. Their comments on the ACSP are not yet posted, but they will be posted soon.

BNC encourages readers to review them later on the website and when all comments to the Draft Environmental Impact Report are completely reported along with the City’s response to those comments on the City’s website. Just google City of Berkeley Adeline Plan and that will connect you to the full Plan now and later to all of the comments. 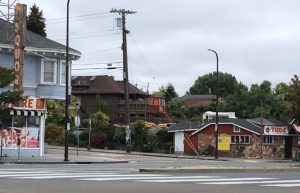 What happens in South Berkeley is of great importance to all of us. Let’s decide here and now that we’ll keep informed about this issue and all the other plans for South, West and North Berkeley and our Downton that have the potential for significantly changing our City’s future. BNC will be sponsoring more meetings regarding these plans, so let’s all begin to get our questions and comments together so we can be participants in guiding what happens, rather than have them thrust upon us all of a sudden. Let’s hear from YOU!