When BNC first started this effort, we didn’t think we’d survive to our 25th anniversary issue.  Yet here we are, still trying to give a stronger voice to Berkeley’s neighborhoods,  and never before has there been a stronger need for neighborhoods where we know one another and work together to help each other. That need is being driven by three forces:

In all of these matters, government can help, but part of the responsibility for response will fall on each of us as individuals.  That’s why neighborhoods are so important now more than ever.

There are those on our City Council and in the State Legislature who think cities must significantly increase the number of people living here without regard to anything else.  Fortunately, there are some on our City Council who believe the time has come to address our need for housing through a new General Plan which explores intelligent land use planning to guide our City through the difficulties we face in the future.  A process we heartily endorse.

We don’t know how the plan to increase density throughout our City will play out in the State Legislature, but to be successful, all of you will have to participate to ensure that the result will be a community that is diverse, safe, beautiful, respectful of the environment, and able to meet the challenges of the future.   We must accept that change is inevitable, and that Berkeley must do its part in resolving our housing problems,  but we all share the responsibility to shape that change through a process that includes the civil exchange of ideas.

There is no denying UC Berkeley is the driving force behind our City’s future. That’s why their current project at the corner of Hearst and Gayley is so very important.  This is not just a matter that affects just one neighborhood on the north side of the campus, it impacts every one of us, no matter where we live in our City.  The 456-page letter written by Planning Director Burroughs makes that very clear.  It contains eye-opening, important information such as how much each of us pays to provide basic services to support expanded campus enrollment, and that student housing is not counted in meeting our assigned regional housing goals!

In view of all of this, BNC has decided to make our 25th Anniversary Issue solely about UC’s latest proposal.   We urge you to read it carefully and GET INVOLVED!  These problems are not just about you – it’s about what will we leave for those that will come after us.

In our last issue, we included a Special eNews Section on the impact of UCB students on our City.  That article consisted of a September 11, 2018, Daily Cal editorial which opened with the statement “Carol Christ must acknowledge UC Berkeley’s role in gentrifying the city.”  You can read the editorial by clicking on the Archives button, Issue 24.

While fully recognizing the need for more student housing, the editorial made the case that UCB students now make up more than one third of the City’s population and that in seeking housing, they often displace low-income families and long-standing local residents. It pointed out the more than 50 percent decrease in the City’s Black population, and the closure of several businesses along Bancroft Way to make way for student housing.  It ended with the following paragraph:

It is more important now than ever that students get the affordable housing that they need. But campus activity and the well-being of Berkeley’s general population are inexorably linked. UC Berkeley is an influential presence, and has the power to shape the city’s future. Christ must acknowledge this. Gentrification isn’t just a matter of higher business turnover rates or a few empty storefronts — this is an issue that affects people’s livelihoods, their sense of community and their roots in the city of Berkeley.(Emphasis added.)

Spot On Daily Cal, we couldn’t have said it better! 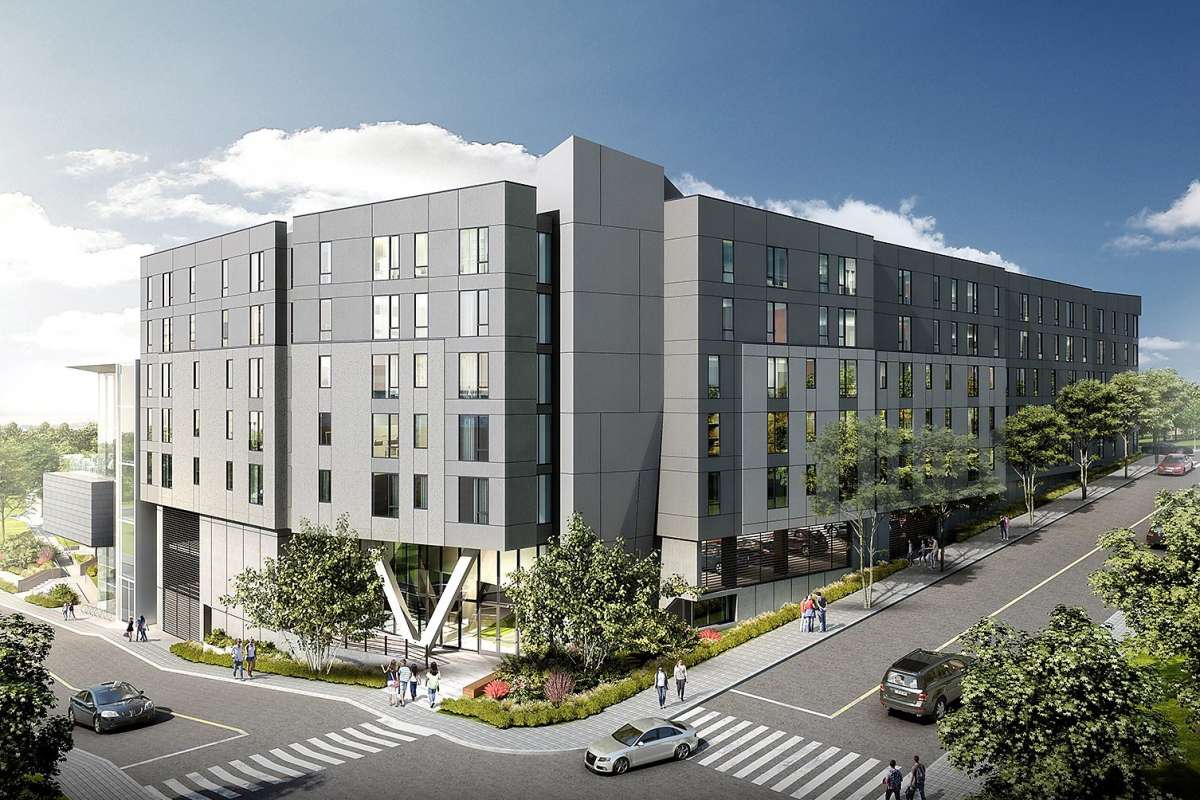 But hold on – the issue exploded after we learned about a Supplemental Environmental Impact Report (SEIR) which is a legally required analysis concerning a proposed campus development plan which would:

The stated purpose of this project and who’s involved:

The purpose of the project is described as necessary to meet the academic needs of the nationally-recognized GSPP which has reached capacity and to provide needed housing for new faculty and grad students.

Years ago, the campus had formed UC Berkeley Strategies which is currently under the direction of Associate Vice Chancellor John Arvin whose job is to bring focused teams together to work on planning, construction and development services for the campus.  This group has completed: Chou Hall, a learning-lab for Haas School of Business students; David Blackwell Hall, a 775-student housing project on Bancroft, Dana and Durant that includes the old Stiles Hall; and Berkeley Way West, the new home of the Schools of Education and Public Health. and the Department of Psychology, plus some private offices, at Oxford, Shattuck, Hearst and Berkeley Way.   Now, the Upper Hearst Street project is high on their work program.

The campus entered into a partnership with Alabama-based Collegiate Housing Foundation (CHF), a 501 (c)(3) organization, to finance the project through the issuance of tax-exempt bonds.  In March 2019, the campus issued a Request for Qualifications to develop and manage the construction of such a project. They received 12 responses, and from those, the campus selected the non-profit, Texas-based American Campus Communities (ACC) who will do the work on behalf of CHF.

What’s really involved in this project:

Any person reading the campus’ description of this project would probably conclude that items 1 and 2 above are inextricably connected .   WRONG!  It turns out the “minor amendment” to the existing LRDP is not so “minor.”  It represents an 8,000 student enrollment increase on the campus for the year 2020, and a projected 11,000 increase through the year 2023, thus establishing a new and larger baseline number for future student enrollment than currently exists. The City calculates that these numbers represent a nearly 500% increase over the numbers in the existing 2020 LRDP and about a 9% increase in the City’s total population.  We also learn that the current projected student enrollment is 33,450, but that the campus currently has about 41,000 students!

On April 12, 2019, Planning Director Timothy Burroughs, wrote a 456-page response stating that the City of Berkeley regards the University’s SEIR as totally inadequate and must be rewritten before proceeding with any further planning.

The City’s response emphasizes that the campus does not contribute to the City’s General Fund that pays for city services such as fire, police, public health, infrastructure, schools and parks.  It states that UCB’s net fiscal impact on the City has increased from an estimated $11 million in 2003 to over $21 million in 2018.   He also points out that the campus has fallen far short of housing its current student population as indicated in a UC Housing Study Report that found about 10% of students experience homelessness and that UCB has the lowest percentage of beds for its student body of any UC campus in the State.

The City raised a number of issues as to whether the increased student enrollment issue can be even legally be tiered off of the existing 2020 LRDP.   It notes that support for a development doesn’t proceed before the EIR analysis is completed, yet when the City asked the campus to extend the public comment period to ensure that the analysis could be finished, the campus refused stating it didn’t want to delay the project from being presented to an upcoming meeting of the Board of Regents for its approval scheduled for May 14-16 in San Francisco.  Seems like a pretty clear message that the campus isn’t much interested in either hearing from its neighbors, or ensuring that a full and complete analysis of conditions and impacts must shape whatever project is proposed.  The City maintains the EIR is inadequate and that full EIRs need to be done separately on the GSPP project and on the proposed increase in enrollment, and that a full and complete analysis of the fiscal and environmental issues must be done before this proposal moves forward.  WE AGREE!

What the City Council did:

In a closed session on April 29, 2019, the City Council met and voted to sue the campus over the plan.  Their decision was announced at the April 30th Berkeley City Council meeting.  There is no public record of who was present at the April 29th meeting or what the vote was.  This information was also not included in the announcement made on April 30.

What the UCB faculty did:

On the following date, May 1, a special standing-room-only meeting of the faculty met to express their concerns which were presented in a paper authored by Professors Sanjay Govindjee (engineering), and Richard Stanton and Nancy Wallace (Haas School of Business) They listed five areas of concern:

Newspaper reports of the meeting included that several complaints at the meeting centered on the $321 million renovation of Cal’s Memorial Stadium and the $153 million cost of the student athletic center that opened in 2012.   The campus has not been able to make any payments on this debt and will owe payments of $26 million to $82 million annually beginning in 2032.   It was also reported that many faculty members were concerned about the reduced number of parking spaces that would result from the project.

Chancellor Christ attended the faculty meeting and defended the project by saying there is an urgent need for faculty housing both to keep current faculty and attract new members.  She indicated she would work to obtain philanthropic donations to help subsidize the projected rental costs and that, if the project failed for any reason, the campus would not be liable for the debt which would be the problem of the developer and proposed property manager, Texas-based American Campus Communities (ACC).   She also stated that some of the 350 existing parking spaces would be replaced elsewhere, but did not specific where that would be, but that shuttle buses would be included if spaces were far away from the campus.

What the faculty did:

Apparently, these re-assurances weren’t enough to calm down the Faculty and they voted 174 to 69 to ask the Chancellor to “immediately suspend” the project and engage them in proposing a new project.

What the immediate neighbors want:

All along, the neighbors to the project have repeatedly stated they would support a reduced project that had a design compatible with the existing neighborhood.

What you can do:

BNC would like to hear from ALL neighborhoods regarding the very important issues that have been raised regarding this project.  Now is the time for you to speak up.  We’d like to put your comments in a letter addressed to Chancellor Christ, Vice Chancellor Arvin, and to the Mayor and all the members of the City Council.

Remember we started this article long quoting the Daily Cal editorial statement that the University has the power to shape this city.  That’s true!   Send your comments to bnc50@berkeleyneighborhoodscouncil.com and stay tuned – there’s more to come.