It’s all about conserving water and managing to get here and there without getting too wet!

With all the rain we’ve been getting, it’s hard to even write the word, “drought”, but the good news is that as of mid-February, the U.S.  Drought Monitor declared that 53% of California is drought-free.  The 53% mark represents an enormous recovery since last year when only about 5% of the State was out of drought! Now, areas in the San Joaquin Valley and most of Southern California are in moderate drought and only 11% of California (much of it in the Santa Barbara and Ventura County areas) are in severe or extreme drought conditions.  The 53% includes the Bay Area where our water supply relies heavily on the Sierra snowpack and that’s high right now — higher than it’s been for 22 years. 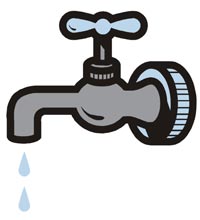 In spite of the good news, however, scientists caution that it will take years for the State to refill depleted ground water aquifers.  They also say we will have to wait until the spring to know if we’ll go back into drought or not, and advise that in any event, California will always be subject to periodic droughts.  Various emergency water conservation requirements were set to expire February 28, but the State Water Board voted unanimously to extend these rules on the basis that while the drought might be over, the need to save water is not.  Conservation may become a way of life in California.  Their advice, in the best interests of the planet, the State and your own home, continue to conserve water even though that seems sort of silly as the rain pours down on our heads and floods are everywhere.

A bit of news that caught our eye was a January 17, 2017 editorial in the East County Times which declared that the 5-year drought was a “wake-up call” that has gone unanswered because the State has not made any meaningful changes to help ease the next drought which is sure to arrive.  Who remembers, but two years ago, voters approved a bond issue authorizing almost $3 Billion for “water storage,” and not a penny has been spent.  Apparently some proposals have been discussed for 20 years with no action.  Recent events regarding the Oroville Dam will probably use some of that money, but what else needs to be done since the State is predicting big population increases? While there was only a 1% growth statewide, the nine Bay Area counties added 85,000 new residents, with three of the fastest growing counties in the state being San Francisco, Alameda and Contra Costa.  Housing and water supply are clearly related issues, and it seems reasonable to expect that planners on both issues should be working together.

BNC would like neighborhood leaders to consider asking the Mayor’s Office to assign a staff member (not hire an expensive lobbyist but assign an existing staff member, or arrange for a grad student intern in public policy) to monitor what is going on in Sacramento regarding issues that affect Berkeley, particularly around housing and water — and let’s not forget about programs for the mentally ill, drug addiction and the homeless either.  That would be one very interesting job! The email address to use is mayor@cityofberkeley.info.

Please let BNC know what you think and do, so we can more effectively work on these issues.  We’ve already put forward the idea of having each unit in multiple unit buildings have their own water meters so that residents can effectively practice conservation.  Developers didn’t like that idea because it was too expensive.  Your comments about these ideas, and suggestions for other things to do at the local community level are most welcome.

And then there is BART…

Because we’ve been hearing a lot of people complaining about overcrowding and not being able to board a train because it was too full, it was a surprise to learn that a beginning of the year survey of riders showed only a modest dip in satisfaction among BART riders.  It was even more of a surprise to learn how BART was going to address the issue.  BART announced in February plans to remove one row of the usual 4 rows of seats — two on each side in what is known as “B-cars” which are the heaviest used because they are in the middle of the train.  They’ve calculated this will enable them to add more than 10,000 riders in the morning and evening commute because removing one seat frees up space for about three people to stand.  This is supposed to reduce the number of people who can’t board a train because it’s already crowded and also provide more revenue for BART of around $10 Million.  They will first remove 380 seats from 669 cars, and sometime in the future, put in service new cars that will come with fewer seats and three doors allowing people to enter and exit more efficiently.  Also, BART plans to change the color of the seats that currently are reserved for the disabled and elderly so that the seats stand out more and add some longer standing straps.  BART doesn’t have the money to pay for all of these changes, so they intend to go to the Metropolitan Transportation Commission and request up to a $3 increase in bridge tolls.  This is in addition to the measure which the voters approved in last November’s election.

But the biggest surprise shock of all was the San Francisco Chronicle report on February 13, 2017 that for the past five months, BART has been paying five station agents (they each make $73,609 a year), and one train dispatch supervisor (who is paid $89,806 a year) to “work” in the yet-to-be opened Warm Springs Station in Fremont.  This amounts to around $68,089 (more if it doesn’t include benefits) for the past five months, and it’s still going on! BART explains this by stating that the BART union contract says workers can only sign up for station assignments twice a year and they needed to have staff ready when this new station was set to open.  It was supposed to open in November, but there was a delay and right now, because of further problems, the opening date is still unknown, so staff is just sitting there in a closed station, and will continue to do so for a while.  We just wonder why these contracts can’t include provisions that allow workers to sign up for assignments, but when unavoidable problems are encountered those assignments can be delayed.