Well, to begin with there’s the Good News that the Friends of R1-A won some zoning changes and then there is the Bad News that violations of Berkeley’s Election Laws don’t seem to make any difference.  Then there is the issue about the North Berkeley BART Station.

The Good News: Part of the R1-A District is known as Westbrae.  The other part is in West Berkeley just below San Pablo Avenue.  See map below.

The R1-A zoning district allows 2 full size houses when there is at least a 4,500 ft lot.  Previously, the height limit for both houses in the District was 28 ft (2 to 3 stories) with a Administrative Use Permit (AUP) required if over 35 ft.  Since houses in Berkeley over the years been built close together, this could result in the rear house looming over the existing house with its shadows impacting both the front house and neighboring houses, especially if it was proposed that the existing house be demolished and 2 large houses would be proposed to the maximum height.

During an earlier time, neighborhoods felt these types of concerns about proposed development could be resolved through the Use Permit process put in place under the voter-approved Neighborhood Preservation Ordinance.  But times were changing.   Developer interest increased and there were changes in State law. A developer-friendly City Council and Zoning Adjustments Board (ZAB) emerged that didn’t consider loss of privacy and sunlight to be that important.  In response, more and more people began to request changes to the existing zoning code.

The residents who were involved in seeking to establish an appropriate, reasonable and neighborly R1-A District had a long journey.  There were 3 different Council referrals to the Planning Commission to come up with a solution, endless community meetings, ZAB meetings and at least 10 meetings of the Planning Commission, including 3 public hearings, before coming to the Council on March 27, 2018.

Throughout this long discussion, the main issue was the relationship of the rear house to the front one.  The Friends of R1-A wanted the rear building to be smaller than the front one in order to take into consideration the privacy and sunlight of neighboring houses.  Opposition came from City Staff who initially wanted no reduction in the rear building because of the housing crisis, citing the need for family sized housing, and others who wanted to proceed with specific developments in the District.  Thanks to the efforts led by Toni Mester and Ed Herzog, and the 245 people who signed their petition, the Council voted to make the following changes:

Section 4 of the new ordinance makes the changes effective immediately, and specifically states that it will apply to projects that have not year received a Use Permit.

The Council voted separately on the Ordinance without Section 4 and then on Section 4 as follows:

Voting No for the Ordinance, without Section 4: Council Member Worthington

Voting No on Section 4:  Council Members Droste and Worthington

The vote for the Second Reading of the Ordinance occurred on April 24, 2018 and it was exactly the same as the vote on March 27, 2018.  Changes to the R1-A Ordinance, including Section 4, went into effect 30 days thereafter.

Be aware that the standards stated above are not the standards for Accessory Dwelling Units (ADU).  There is still a discussion about those going on.  However, we are informed that the Planning Commission voted in January to increase the size of ADUs to 850 sq feet.  More info to come on this.

The Bad News involves a violation of the Berkeley Election Reform Act (BERA) that occurred about a year and a half ago, and nothing has been done about it. 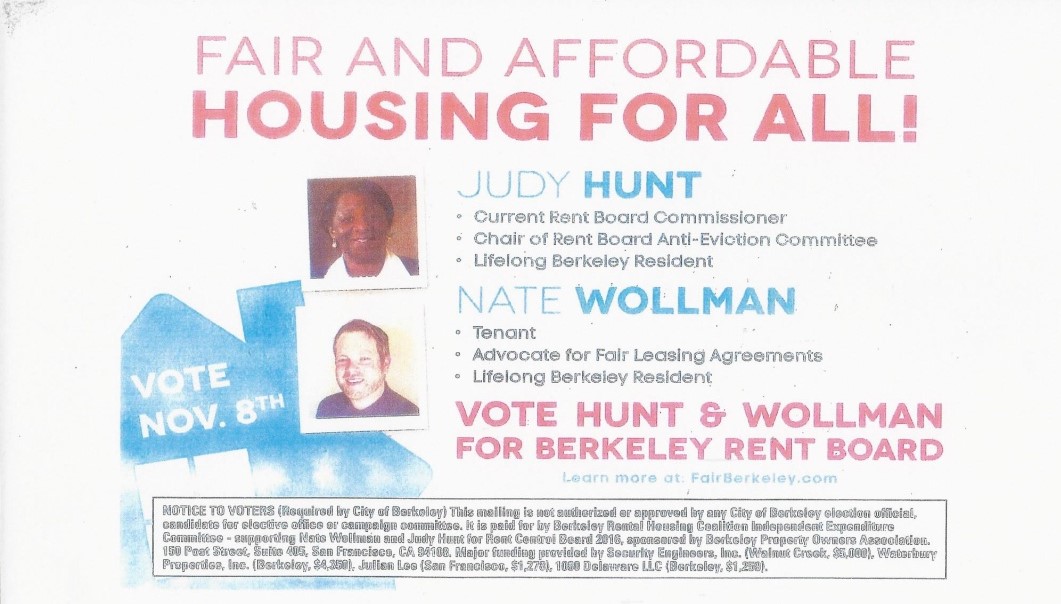 It seems that the Berkeley Rental Housing Coalition Independent Expenditure Committee (BRHCIEC) sponsored by the Berkeley Property Owners Association (BPOA) violated BERA by sending out a mailer in support of Judy Hunt and Nate Wollman for Rent Board Commissioner six days before the election and not reporting that action to the City Clerk within 24 hours of the action as is required by State and local election law. The mailer was sent out on November 2, 2016.  Notice of the mailing was required by November 2, 2016.  Notice didn’t occur until January 31, 2017.  That’s 89 days late!

The City Attorney was notified of the possible violation in January 2017 and the matter was presented to the Fair Campaign Practices Commission (FCPC) at their March 16, 2017 regular meeting.

The attorney for the BRHCIEC told the FPCP that the notification to the City Clerk was a mistake, that the employee who made the mistake was fired after the violation became known, and that his office would pay the fine.  The FPCP voted to have their staff investigate the matter further and report back at their meeting scheduled for July 20, 2017.

After receiving the staff report and hearing from the public, the FPCP voted to authorize a stipulated agreement with the BRHCIEC that set a monetary penalty of $18,900.84.  This is the maximum allowed by BERA, i.e., it equals the amount of money spent for the mailer. The vote was 5 Yes:  Commissioners Harper, Metzger, Soichet, Sridharan and Tsui.  Voting No:  Smith.  Three Commissioners absent.

After the fine amount was set, the law firm changed its mind about paying the fine. The City was notified of this by a letter to the FPCP dated September 21, 2017 requesting that a negotiating committee be appointed to consider the fine amount.  The FCPC declined this request and asked that a hearing date be set.  To date, about a year and half after the violation, no hearing has been held and the matter is still pending.  BNC is inclined to ask, what good are our regulations when they aren’t enforced?

So how did the election turn out?

Four seats on the Rent Board were open.  Elected were Soto-Vigil, Simon-Weisberg. Murphy and Tregub.  Judy Hunt came in #5 with about 14% of the vote, Nate Wollman was last with about 9% of the vote.  The City’s website incorrectly states that Judy Hunt received 20% – an error even the math-deprived BNC eye can detect!

Then there’s the pending news about the North Berkeley BART Station.

On a rainy March 16 night, motivated by an earlier posting showing a model of the North Berkeley Station with a 13-story building on it, almost 400 people gathered at Jefferson School to hear from Council Member Linda Maio, Mayor Jessie Arreguin, BART Board President Rebecca Saltzman and BART Planning Chief Val Menotti.  The posting was made by East Bay for Everyone.  In response to the flood of comments received, East Bay for Everyone said the model was simply a game for everyone to play with during their 2nd birthday party at Spats.

According to the internet, Berkeley BARF (Bay Area Renters Federation) formed in Berkeley in 2015 was reborn as East Bay for Everyone.  It became a 501c4 (not tax deductible) in August 2017 and now claims 600 members.  Largely a volunteer group it is actively seeking new members so they can hire full time staff to advocate to build more housing in the East Bay. Their website states they are “a member organization of the YIMBY Party,” the folks in San Francisco that we’ve written about before.  Victoria Fierce and Greg Magofña are Co-Executives, both of whom we’ve seen in Berkeley supporting various proposals.  They were supporters of SB 827, and are currently supporting Buffy Wicks for the upcoming Assembly District 15 elections. 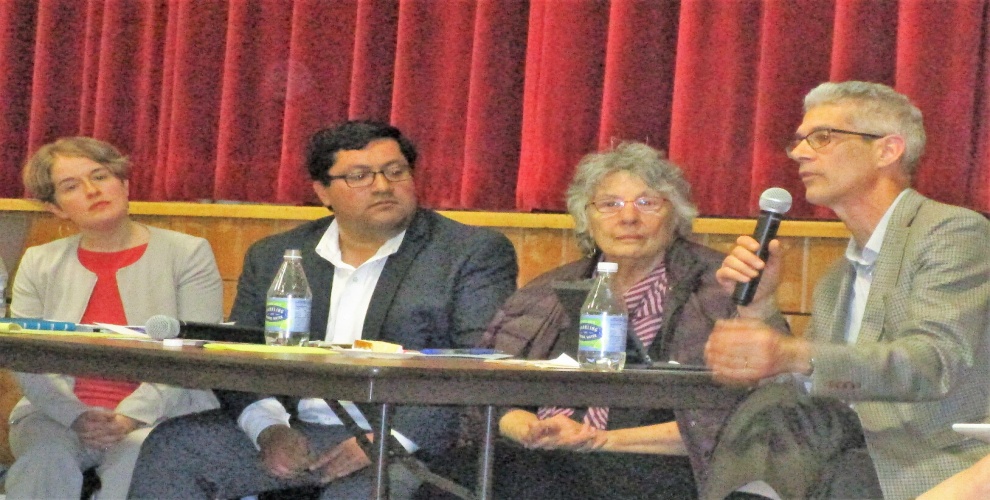 At the March 16 meeting, BART planning chief Val Menotti, was quick to point out there are no specific proposals on the table.  BART has completed 11 projects, building close to 2,000 units of housing, 35% of which were affordable and that 7 were under construction.  BART’s overall goal in building station-connected housing is 35% affordable, with 20% the minimum for any one project – meaning some project will have more and others less in order to reach their 35% overall goal.

We were also told that the two BART parking lots are not currently zoned (one facing Sacramento Street, the other more deeply embedded in the neighborhood), so the first step will be to decide on the zoning.  Currently the State is considering AB 2923 which gives the BART Board of Directors (not the City) the power to set Transit Oriented Development zoning standards on BART owned parcels by August of 2019. These standards will set the lowest permissible height and density and the maximum parking allowed.  Meaning, of course, that development proposals could be above the numbers set for height and density but the parking number can be below but not above that amount. The City will have a 2-year period to respond, and if the City and BART don’t agree, BART will prevail.  Mayor Arreguin announced his opposition to both SB 827 and AB 2923 to the biggest applause of the evening.

About 75 speakers made comments at the meeting, most saying that they would welcome housing that is compatible with the existing surrounding neighborhood and bringing up concerns about the stability of the tunnel that runs under the parking lot, and questioning where the parking for BART riders who don’t live in the neighborhood would be located.  Some spoke out about the need for housing no matter what.

Well, to say the least, there is a lot more to come on this one!