There’s always a lot to think about in Berkeley, but SB 827 really took a lot of people by surprise. It was defeated in committee, but every political commentator says, there is no question, it will be back.  So, what’s it all about?

SB 827 was introduced on January 3, 2018 by Senator Scott Wiener.  Its Principal Co-authors are Senator Nancy Skinner and Assembly Member Philip Y. Ting.  Senator Ben Huesco is also listed on the bill, but simply as a co-author.  With all the fuss and fury this bill raised across the entire State, the interesting thing is that newspapers usually described it as Scott Wiener’s bill, leaving off the other names.

So Who are the people involved?

Well, Scott Wiener is not entirely unknown to the Bay Area.  He was elected to the Senate in November 2016, and represents all of San Francisco, Broadmoor, Colma, Daly City and part of South San Francisco.  He’s usually referred to as a “progressive” and last year he authored SB 35.  (Check out “The Cultural Corner” in this E-News issue to read more about that bill’s effect on a proposed project on Spenger’s parking lot.)

We well know Nancy Skinner, who after serving in the Assembly, was elected to the Senate in November 2016 and represents cities on the west side of the hills along the I-880 corridor in Contra Costa and Alameda Counties.

Ben Huesco came to the Senate in 2013 and represents Imperial County and parts of San Diego.

Philip Y. Ting is an Assembly Member who represents the western side of much the same area as Senator Wiener.

What Did the Bill Do?

After the bill was introduced and before it was heard in any committee, it was amended in March and again in April of 2018.  Provisions in the bill’s final form are as follows:  Local governments (including charter cities like Berkeley) are required to grant a “Transit Rich Housing Bonus,” if the developer requests, and it meets an applicable affordable housing requirement, and is located within a 1/2 mile radius of a major transit stop or within a 1/4 mile radius of a stop on a “high-quality” bus corridor.

A residential building is defined as having at least 2/3s of its square footage designated for residential use.  If there are existing structures with rent-controlled units, or housing low-income households, where a transit-rich project is proposed, the developer must pay rental assistance to the existing household for up to 3 and a half years, and offer that household a new unit at their former rent amount.

Heights of such transit-rich projects that are within a 1/4 mile radius of a major transit stop shall be 55′, or within a 1/2 mile radius, 45′.  If the site has higher height limits, the height of the proposed project can be to that higher limit.

If a local government approves any ordinance which would decrease the existing residential zoning on or after the introduction of this bill, the provisions of 827 will prevail.

BNC is not exactly sure which bus lines (AC Transit or Cal) meet the bill’s criteria, but we’ve been told that this bill could probably affect such streets as Adeline, Arlington, Ashby, Claremont, College, Euclid, Hopkins, Gilman, Monterey, Sacramento, San Pablo, Shattuck, Solano, Spruce and University.  If it affected only a few of these streets, it clearly would still impact many of our single family neighborhoods. The Los Angeles Times reported that nearly 50% of that City’s single family homes would be impacted by this bill.

In the January 22, 2018 issue of Berkeleyside, Berkeley Mayor Jesse Arreguín characterized the bill as “a declaration of war against our neighborhoods,” and co-author Senator Nancy Skinner stated in that same issue, that while she believed there was not enough land in Berkeley to build the amount of housing we need if we retain single-family zoning she said, “If we don’t densify, we are not going to be able to address the need for the number of units.”

Senator Ben Allen of Santa Monica replied by stating that “Density for density’s sake doesn’t lead to affordability.  All one has to do is look at Manhattan where everyone is paying $5,000 a month to live in a closet.”

SB 827 went to its first committee hearing before the 13-member Senate Transportation Committee on April 17, 2018.  It was sponsored by  SF YIMBY Action, a coalition of pro-development ‘Yes in My Backyard’ groups, Silicone Valley CEOs, and development and real estate trade associations.  Opposed to the bill were the State Building and Trade Council of California (because prevailing wages were not specified), the Western Center on Law and Poverty, Sierra Club,  Los Angeles City Council (unanimously), San Francisco Board of Supervisors, and the cities of Lafayette, Cupertino, Palo Alto, Milpitas, Beverly Hills and Marin County.  Senator Wiener stated approval was a long-shot, but he felt he had to try, given the success of SB 35.

Well, he was right about it being a long-shot.  The bill failed, but not because Senators voted against it – it was defeated mainly by the 5 senators that took the “Not Voting” option.  Four senators voted “No” (representing the San Jose, Ceres, Santa Monica and Healdsburg areas).  Four senators voted “Yes” – 2 Republicans (Gaines-El Dorado Hills and Morrell-Rancho Cucamonga) and 2 Democrats, Scott Wiener and Nancy Skinner.

Afterward, the East Bay Times, April 18, 2018, stated that Senator Wiener said he would keep working and come back with a strong proposal in 2019. 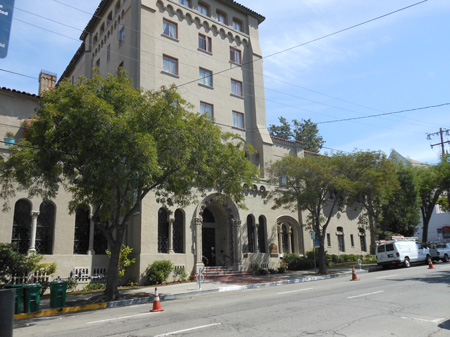 Events are already happening to carry out Mr. Wiener’s statement.  One of them occurred right here in Berkeley on May 4, 2018 at the Berkeley City Club, 2315 Durant, 11:30 am to 2 pm in the Julia Morgan Ballroom.  City Manager Dee Williams-Ridley provided welcoming remarks and introduced the keynote speaker, Senator Nancy Skinner.  Calling it a “conversation,”  it was moderated by  David Garcia, Policy Director of UC Berkeley Terner Center for Housing Innovations, and Economist for BuildZoom, Issi Romem.  Attending cost you $49.56 and reservations were made through the Berkeley Chamber of Commerce.

The announcement for the event was made through Today and Tomorrow  Berkeley Chamber of Commerce.  One announcement seen by BNC stated the event was to “promote California’s housing SB 827,” and the Chamber website billed the event as a “crash course on the Bay Area’s severe housing crisis.  That website showed photos which, while not stated, must have been taken at a previous event. One depicted Denise Pinkston, described as TMG Partners/Chair of the Bay Area Council speaking with Chamber CEO Emeritus Polly Armstrong.  Ms. Pinkston is currently the Vice Chair of Berkeley’s Zoning Adjustments Board. The other photo was of Patrick Kennedy, Panoramic Interests, a local developer.

The announcement included a link to a January 5, 2018 article on the Slate website that describes 827 as a “bill that would all but abolish the city’s famously strict land use controls–and virtually every other residential zoning restriction in California’s urban neighborhoods.”  Check it out at slate.com.

There was no participant in this conversation who might be an opponent of SB 827, nor was there any mention of opposition to SB 827 and what it does.  BNC will try and find out what happens and let you know.