In 2017, the neighborhood derailed construction of a proposed condominium project at 1155-1173 Hearst Avenue that would have displaced residents, some of whom have lived there since the 1990s.  The project located between San Pablo and Curtis, on the south side of Hearst Avenue, is regarded as an “infill“ project which exempts it from California Environmental Quality Act (CEQA) provisions.  The applicant, Hearst Avenue Cottages, LLC, represented by Mark Rhoades describes the site as a “Transit Oriented Development (TOD)” because it is one block from “one of the best transit regional corridors in Berkeley” (San Pablo Avenue) and two blocks from “one of Berkeley’s transit served crossroads” (San Pablo/University Avenue intersection).

At that time, the project involved two separate lots, which would be merged into one parcel.  Eleven condominiums would be added to the seven existing units for a total of 18 units, each with one parking space.  Two of the units would be “affordable” which entitled the project to a 35% State Density Bonus and up to three “concessions and incentives.”  The site had a well-documented long history of hydrology issues with consistent flooding of adjacent properties.  As usual, staff recommended approval, but the project did not receive approval from the Zoning Adjustments Board (ZAB) which told the developer to re-consider the proposal.

A new project was presented to ZAB on August 23, 2018.  The applicant’s name is still stated as Hearst Avenue Cottages, LLC, and Mark Rhoades continues to represent that individual or group.  At one point in discussion with ZAB members, Mr. Rhoades stated that “one investor is a Berkeley Realtor,” but said no more.  The California Secretary of State website indicates that the name, Hearst Street Cottages, LLC was registered January 16, 2015 and listed the agent for contact as Mark K. Brown, with offices in Walnut Creek. 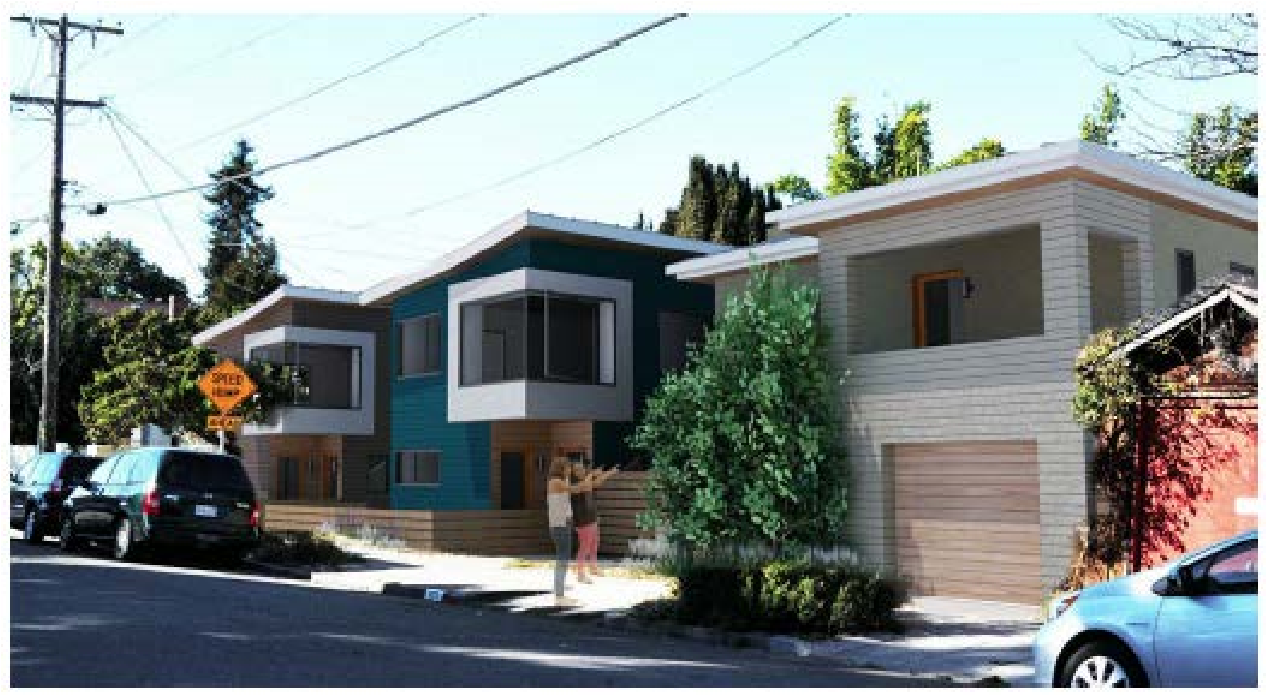 Mr. Rhoades described the differences between the former project and this one as follows:  The lots would not be merged.  Seven existing units would be rehabilitated and six new condominium units constructed, for a total of 13 housing units.  Six of the seven existing buildings are in duplexes occupied by renters.  The other existing building is a single-family home that is currently vacant. No density bonus is being sought, all buildings would be two-story, except one would have a “third-story element,” a roof garden.  All existing tenants would remain in place as long as they wanted to stay, and only after they voluntarily left, would the rehabilitation work and conversion to condominium status begin.  Units with four new bedrooms and four new bathrooms would be added to some of the duplexes.  These would be “family units,” rather than mini-dorms.

At the ZAB hearing, no one spoke in favor of the project.  Eighteen people spoke in opposition.  Their concerns centered around two main issues, protections for existing tenants and the existing flooding problems.  Public comment, staff and applicant response and ZAB comments regarding tenant protection issues were:

The issues regarding flooding in and around this site was clearly identified as the second primary concern.  Several speakers  produced maps which indicated that a branch of Strawberry Creek flowed through the site and that the creek had been filled in at some time in the past and that this had consistently caused severe flooding and subsidence of land in the area.   Neighbors also reported specific instances when they had suffered flooding in basements and backyards of their properties.   One of the 18 speakers in opposition identified himself as a hydrologist who stated that a focused geotechnical report on the site was called for, and that the study presented by the applicant didn’t address that need.  The concern was expressed not only for the safety of the buildings on the project site but that the proposed drainage system for the new project will worsen past flooding problems for surrounding properties.  City staff and Mr. Rhoades were adamant that the project was “infill” and as such provisions of the California Environmental Quality Act (CEQA) provisions do not apply.

When public testimony and questions ended, ZAB members discussed the decision before them as if it was solely a matter of imposing the right conditions upon the development.  There was no consideration of denial, or reduction in mass.  There was only approval with conditions which included such matters as reconfiguring the four bedroom units, ensuring existing parking for existing tenants, providing existing tenants access to temporary relocation benefits, and meeting with the neighborhood during the time construction was in progress.

ZAB members decided that a geotechnical report would be required, but they did not describe the focus (or that it even should be “focused”) of such a new report. Mark Rhoades had stated earlier that a “blue curb” near the property was acting as a dam, and that removal of that curb would solve the flooding problem.  There was very little discussion regarding this subject, and the technical reports submitted by the developer and the neighbors are not in agreement.  Furthermore, there is no mention of how the City’s aged infrastructure will need to be repaired, modified or replaced to resolve the drainage problems that will come with projected heavy storms resulting from climate change and from sea level rise that is beginning to occur now and that will hamper drainage from the hills surrounding the Bay.

The motion to approve the project was passed as follows:

It is interesting to note that five of ZAB members voting that evening were substitutes most of whom will likely be filling the position on a one-time basis, or in the case of one appointee, is a new replacement for a member who has just resigned.

The neighborhood has filed an appeal, one of the big reasons being that Mark Rhoades is already maintaining that the condition regarding obtaining a geotechnical report has been fulfilled by the reports that have been previously submitted.